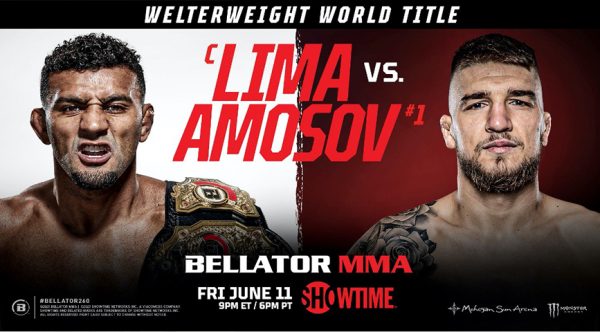 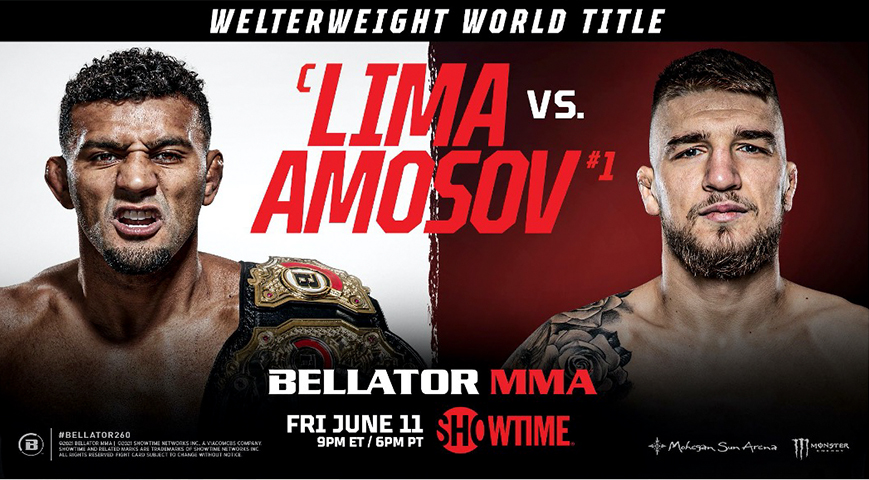 LOS ANGELES – BELLATOR MMA’s Welterweight World Champion Douglas Lima (32-8) will defend his 170-pound title against the undefeated and top-ranked Yaroslav Amosov (25-0) in the main event of BELLATOR MMA 260 on Friday, June 11 at Mohegan Sun Arena in Uncasville, Conn. The event will be televised live on SHOWTIME at 9 p.m. ET/6 p.m. PT.

In addition to the main event, a pair of preliminary bouts are official, as No. 9 ranked Tywan Claxton (6-2) faces the undefeated and newly signed Justin Gonzales (11-0) in featherweight action, while Connecticut’s Nick Newell (16-3) takes center stage against promotional debutant Bobby King (9-3) in a 155-pound clash. The preliminary card will stream live on the BELLATOR MMA YouTube channel, SHOWTIME Sports YouTube channel and Pluto TV. Additional bouts will be announced at a later date.

Fighting out of American Top Team in Atlanta, Ga., “The Phenom” Douglas Lima will look to protect the 170-pound title for the first time since reclaiming his status as division king with a win over Rory MacDonald at BELLATOR 232 in 2019. With notable wins over the likes of Michael “Venom” Page, Paul Daley, Lorenz Larkin, and MacDonald, Lima is the promotion’s No. 6 ranked pound-for-pound fighter. Now, he looks to reassert his dominance at 170-pounds after challenging middleweight world champion Gegard Mousasi in an attempt to become double-champ. The BELLATOR MMA Welterweight World Grand Prix winner went five rounds with Mousasi, giving fans an instant-classic and a glimpse of just how special the three-time BELLATOR welterweight world champion truly is. The 18-fight BELLATOR veteran is on a mission to to become the first to defeat Amosov on June 11.

“I’m pumped to get back in the cage and show everyone why I’m the most-feared welterweight in the game,” said Lima. “Amosov is a game opponent, who has climbed the rankings against top competition. He’s more than deserving of this title shot, but this is still my division and that isn’t changing any time soon.”

A relatively new addition amongst the sport’s elite welterweights, Amosov will enter his first BELLATOR world title bout riding a streak of six consecutive victories since signing with BELLATOR in 2018. “Dynamo” has established himself as a well-rounded and extremely dangerous fighter, collecting a remarkable 19 wins by finish, including 13 in the first round. The 27-year-old native of Irpin, Ukraine is a three-time combat sambo world champion and the No. 10 ranked pound-for-pound athlete in BELLATOR. Training out of American Top Team in Florida, Amosov aims to protect his unblemished professional mark of 25-0 and snatch away Lima’s most prized possession.

“It is an honor to challenge Douglas Lima for the Bellator Welterweight Title,” Amosov said. “I have dreamed of becoming a champion since I have chose this path of MMA. Here I am, undefeated and on the verge of earning the gold.”

BELLATOR MMA fans who are new subscribers to the SHOWTIME streaming service can sign up now for a limited time offer which includes a 30-day free trial, followed by a discounted monthly subscription fee of $4.99/month for the next six months. Viewers can sign up at SHO.com/BellatorMMA. Subscribers will be delivered two premier BELLATOR MMA events per month throughout 2021 and beyond, with all events scheduled to air live at 9 p.m. ET/6 p.m. PT anywhere the SHOWTIME service is available.

BELLATOR MMA is a leading global mixed martial arts and kickboxing organization featuring many of the best fighters in the world. Under the direction of veteran fight promoter Scott Coker, BELLATOR events take place in major cities worldwide and can be seen on television in over 160 countries to an available audience of over one billion people. In the United States, BELLATOR can be seen on SHOWTIME. BELLATOR is comprised of an executive team that includes top industry professionals in television production, live event orchestration, fighter development/relations, venue procurement, sponsorship creation/development, international licensing, marketing, advertising, publicity and commission relations. BELLATOR is based in Hollywood, Calif. and owned by entertainment giant ViacomCBS, home to the world’s premier entertainment brands that connect with audiences through compelling content across television, motion picture, online and mobile platforms.