“Karma” is the word Harut Grigorian used to describe his first-round stoppage win over Murthel Groenhart in the GLORY 50 CHICAGO main event.

The third fight between the two welterweight rivals was just as action-packed as the previous two installments, but in contrast to the preceding two bouts it was Grigorian who came away with the win.

Groenhart stopped Grigorian in 2012 and again at GLORY 42 PARIS last year, the latter stoppage being one of the most notorious in kickboxing history; thanks to Groenhart hitting Grigorian with a blow which was legal under the rules but polarized opinions among the fanbase.

Insult was added to injury for Grigorian when video of the knockout went worldwide viral, appearing on numerous mainstream news platforms in dozens of languages. For a time after the fight there was no escape from it for Grigorian and that all added to the tension in the build-up to this rematch.

With Groenhart having two stoppage wins over Grigorian already, oddsmakers naturally considered him the favorite to win this third encounter. But Groenhart’s career has been defined by consistent inconsistency and that cycle continued in Chicago.

There was no kind of feeling-out process. When the fight started the two engaged immediately and got into trading heavy shots. Groenhart wanted to put the pressure on Grigorian and back him up, but found his forward momentum checked by hard leg kicks from the Armenian.

From there the fight turned quickly in Grigorian’s favor as he barraged Groenhart with his trademark power-hooks. A hard body right hand to the body folded Groenhart at the waist and created an opening for a shot to the temple which sent him to the canvas.

Groenhart took a moment to regain his feet. He beat the count but was clearly rocked. Grigorian surged at him on the restart and went straight back to work, putting him immediately under another barrage.

Once again Groenhart was sent staggering. He bounced off the ropes and even though he didn’t go down, referee Chris Wagner felt he was seeing Groenhart in enough distress to warrant the fight being stopped.

It took Groenhart a second or two to realize what Wagner was telling him. He began protesting but even as he did so, the ring was being filled by Grigorian’s team and their wild celebrations.

Protestations to the referee went nowhere; Wagner stood by his decision and said he had seen Groenhart’s eyes roll back and that he was “saving him from inevitable further damage” at the point he waved the fight off.

Grigorian and Groenhart would both surely have preferred that the ending was more definitive. But the referee’s decision is final. The trilogy now stands at 2-1 between them and a fourth fight seems inevitable in the none-too-distant future. 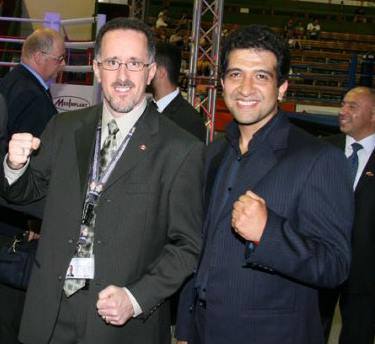