Official US Open Statement on the Coronavirus 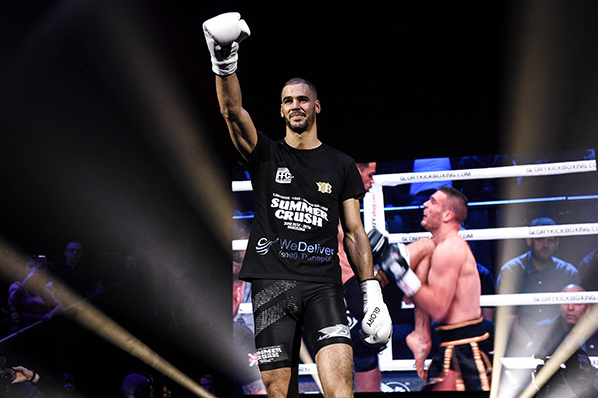 Asked for some comments during an in-ring post-fight interview, Belgaroui went straight for the jugular of middleweight champion Alex ‘Po Atan’ Pereira (32-6, 21 KO’s), calling him out for what would be a fourth fight between them.

Pereira is 2-1 over Belgaroui and won both of the last two matches by stoppage, with the most recent (GLORY 55) being one of the most emphatic in GLORY history. Since then, the Brazilian is on a four-fight win streak, three of those wins by knockout and one of those knockouts at light-heavyweight, where he won the interim light-heavyweight championship.

Far from being deterred by this, Belgaroui is only more determined to get another shot at the Brazilian and his belt. But when the call-out was reposted to GLORY’s official Instagram account, Pereira was quick to chime in.

The reigning champion offered some uncomplimentary critique of Belgaroui’s performance at GLORY 75, saying the Dutch-Tunisian “threw over 700 punches with all your power and at the same time didn’t convince nobody” and also that he had “gassed in the first round”.

But the real heat came at the end of his post.

It didn’t take long for Belgaroui to pick up on the comments and come back with a response of his own. While taking the high road and refusing to be drawn into a war of words, he did invite Pereira to put his money where his mouth is.

“Losing [to Pereira] two years ago only meant motivation and growth. This [next] fight will be for those who don’t believe in this principle, and so changes minds and lives,” he said.

“[Pereira], congratulations and respect on your great run at GLORY lately… if you accept this challenge, I’ll put up my whole fight purse, going with double or nothing! Agree and let’s go at it.”

Now ranked #2, Belgaroui is one place behind Donovan Wisse (15-1, 8 KO’s) in the middleweight contender list. Wisse also holds a win over Belgaroui from their fight last year and prior to GLORY 75, Belgaroui said he is also chasing that rematch in a bid to settle the scores.

Pereira’s last fight was at December’s GLORY: COLLISION 2 event where he defended his title with a first-round stoppage of Ertugul Bayrak.