ISKA´s Continued Support of GLORY is Now in Question

ISKA´s Continued Support of GLORY is Now in Question

ISKA’s Continued Support of GLORY is Now in Question.

International Sport Kickboxing Association has been sanctioning GLORY kickboxing events since 2013. This includes supporting GLORY’s efforts to operate in America by handling regulatory affairs with the presiding state athletic commissions as well as fully regulating and officiating their events held throughout Europe.  For 65 events, ISKA has provided sanctioning, officiating and/or regulatory services for the promotion billed as “the premiere stand-up combat sports league”.  It appears that ISKA’s willingness to continue to support GLORY is now in question.

ISKA President Cory Schafer commented, “We make decisions regarding sanctioning based on a few basic principles.  Is it good for our sport’s athletes? Is it good for our sport? Will the promotion work responsibly and treat everyone fairly? While clearly GLORY has presented opportunities for athletes and raised the profile of the sport,  issues concerning fair, reasonable and responsible treatment require urgent resolution.”

Mr. Schafer worked closely with Cor Hemmers to re-write the GLORY rules in 2013 and  can be seen as the presenter in the official GLORY rules video that appears on YouTube.  He agreed to take a position on the  Association of Boxing Commission’s Kickboxing Rules Committee, coauthored and presented the proposal for the ABC Unified Rules of Professional Kickboxing, which was approved unanimously.

Collecting sanction fees from GLORY has sometimes been problematic. While working with former CEO’s  Jon Franklin or Marshall Zelaznik, there was never any genuine concern that they wouldn’t fulfill their obligations.  The current situation however is untenable.  GLORY has failed to compensate ISKA officials for their work at GLORY 75 held in Utrecht, Netherlands on February 29th.  Email messages to the entire GLORY leadership expressing concern over this yielded no response other than by GLORY’S American Legal Affairs Director, who was similarly concerned, and has since been released by GLORY.  The following is taken directly from a message sent by Cory Schafer on May 4th.

“Regarding the unpaid officials, though we recognize that they do this work more out of passion then for the minimal compensation, under these unprecedented circumstances I’d like you to consider that for some of these unpaid officials, getting their due compensation for an event that occurred more than two months ago may be the difference between groceries or not, rent or not.  I don’t know what to say beyond that.”

GLORY did not respond.

ISKA received an email message on August 10th from Bill Borson, GLORY’s television producer requesting the sanctioning and regulation of their planned double-event scheduled for October 2nds and 3rd in the Netherlands.  Cory Schafer spoke with Bill Borson by telephone and expressed that ISKA would be willing to support the events under terms to be decided, but of course, officials from GLORY 75 Utrecht would need to be compensated before any work could begin in preparation for GLORY 76 & 77. Serious concern was also expressed regarding their ability to meet the requirements for fighter licensing for the proposed athletes because they had released their fighter operations staff.  ISKA was assured that these issues would be addressed.  Phone calls to Borson since that time all go directly to voicemail.

ISKA has now been informed by reliable sources that the new GLORY leadership has been shopping smaller sanction organizations in what might appear to be a way to proceed with future events without addressing their previous financial obligations.  The Dutch Sports Authority is considering whether or not to issue GLORY an event permit to host an event in Netherlands until everyone from previous events has been compensated.

Cory Schafer states, “We have stood by GLORY for seven years through several changes in leadership and through their recent financial restructuring.  We believe that these concerning issues can be resolved in a way that allows ISKA to continue to address the best interests of the GLORY athletes who rely on us, the sport that we love, and the dedicated officials who deserve to be treated fairly.”

Since GLORY’S financial reorganization, it has been difficult to determine who exactly is steering their ship.  Certainly, everyone hopes that whoever is designated, leads in manner that preserves their right to truly say that they direct the world’s ‘premiere stand-up combat sports league’. 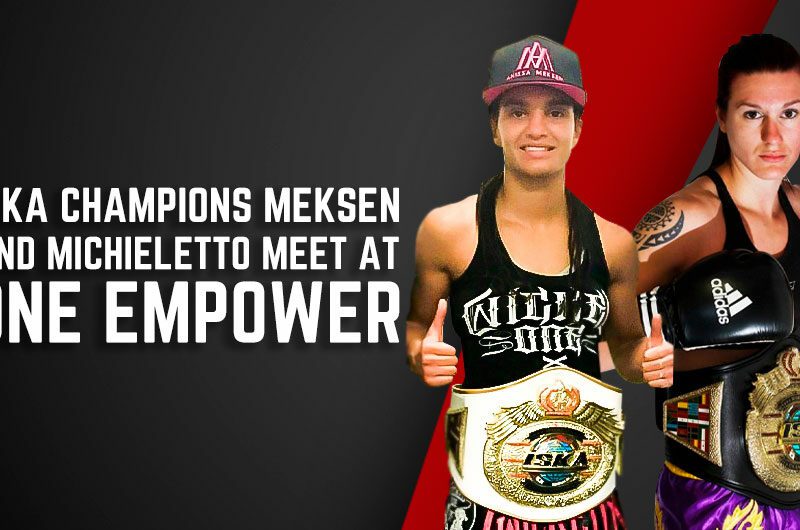 ISKA Champions Meksen and Michieletto meet at ONE EMPOWER