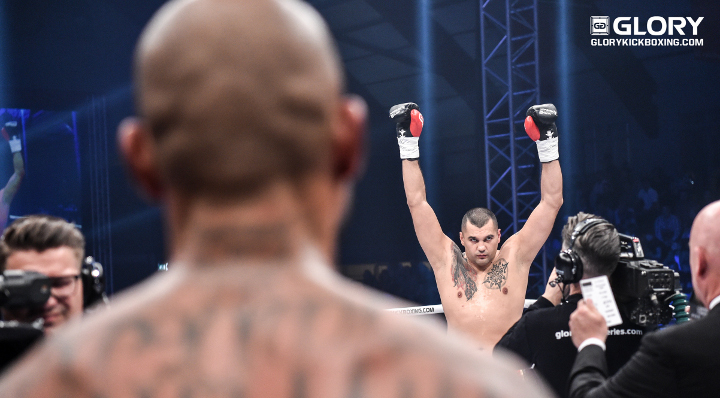 Mladen Brestovac provided himself with a strong entry for ‘Knockout of the Year 2017’ in the GLORY 45 AMSTERDAM main event.

He was facing veteran heavyweight Hesdy Gerges, who went into the bout maintaining that he had never, in his opinion, suffered a legitimate loss in his home city and that he wouldn’t be suffering one now.

True, Gerges does have a GLORY 31 loss to Ismael Londt on his record, but in his opinion – and the opinion is widely shared – it was a bad judges’ decision which robbed him of victory. There would be no such controversy about the result with Brestovac.

Fighting out Zagreb, Croatia, the towering Brestovac is a long-time training partner of fight-sport legend Mirko ‘CroCop’ Filipovic and like him is a natural southpaw with an incredibly powerful left kick.

Gerges’ preferred weapon is also the kick. He likes to aim them to the opponent’s legs and relies more on speed and volume of output than on raw power. His aim in this fight was to take Brestovac’ legs out and thereby take that dangerous left kick away.

When the fight started the two got into circling each other. Gerges opened the scoring by working Brestovac’s lead leg with low kicks to the inside and outside. Brestovac returned fire with his rear leg, striking Gerges in the body twice.

Gerges then fired off a rear leg body kick of his own. Brestovac took it on his forearms then immediately countered with a left-leg head kick. Gerges right arm was vaguely in defensive position but the massive power of the kick simply crashed through it and connected clearly with Gerges’ head.

The towering Egyptian fell to the canvas instantly, not completely disconnected from consciousness but certainly eliminated from the fight and in no position to continue.

If there is any sliver of consolation for Gerges, it is that he fell victim to one of the most perfect pieces of timing and placement that the GLORY ring has ever hosted; a concrete wall would hardly have blocked that kick.

Brestovac now rises to 3-3 in GLORY and 2-1 in his last three GLORY outings, 4-1 in his last five fights when fights outside GLORY are included. He has previously challenged heavyweight champion Rico Verhoeven, losing a decision at GLORY 28 PARIS last year, but this win over Gerges moves him a step closer to a rematch.