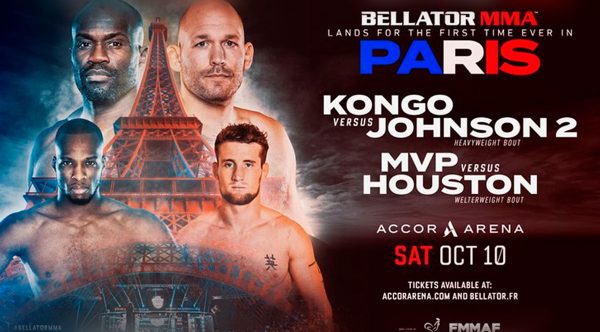 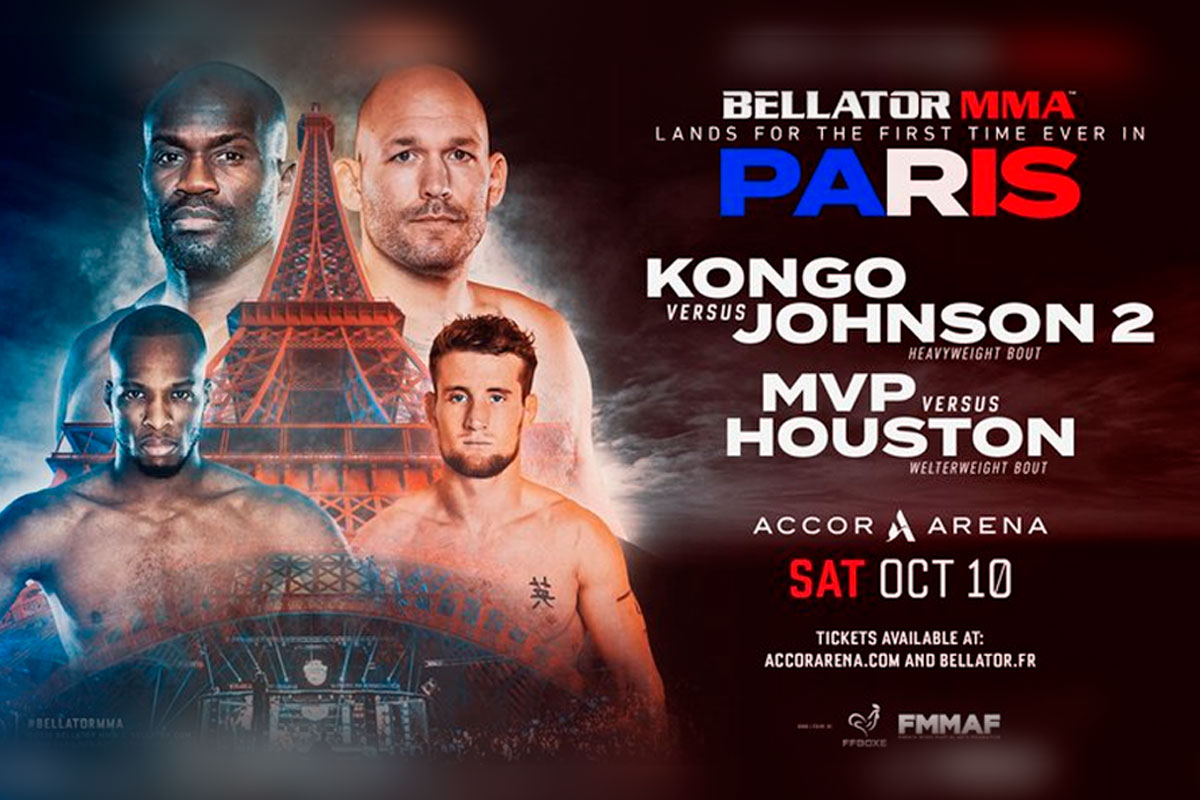 LOS ANGELES – France has approved the practice of mixed martial arts and has placed the sport under the supervision of the French Boxing Federation (FFB). With these recent government approvals, Bellator is pleased to announce that it will become the first promotion to hold a major MMA event in France with a monumental show on Saturday, October 10, 2020 at Accor Arena in Paris. Bellator Paris will feature 13 MMA bouts and three boxing matchups.

Among the athletes competing at Bellator Paris, 10 French fighters will appear on the card, including the renowned Cheick Kongo (30-10-2, 1 NC), who will face off against Tim Johnson (14-6) in a heavyweight clash. Additionally, an exciting welterweight bout between Michael “Venom” Page (17-1), better known to fans as “MVP,” and the debuting undefeated Ross Houston (8-0,1 NC) is also booked for the event.

A limited number of fans will be allowed in attendance for this historic event. Tickets will be available beginning at 10 a.m. CEST on Tuesday, September 15 at accorarena.com and bellator.fr.

Following the governmental decree, the French Boxing Federation is responsible for the implementation of MMA in France. “If I made the choice to initiate a delegation procedure for MMA, it was for its recognition; it is to liberate, supervise and develop its practice,” indicates the Minister of Sports, Roxana Maracineanu. This is a turning point in the history of French sport, as MMA is a discipline that is enjoying growing success, proven by these events capable of bringing together thousands of people and attracting millions of spectators.                   “This is a monumental moment in the history of the sport, as well as our organization, and I am honored that Bellator will promote the very first MMA event in France by a major promotion,” said Bellator President Scott Coker. “Many people have worked tirelessly to bring this to fruition, and it would not have been possible without the support of the Minister of Sports, Roxana Maracineanu, as well as the French Kickboxing Federation sanctioning body. I would also like to thank Accor Arena, who have been an incredible venue partner, and I cannot wait for the French fans to be in attendance and join us live for what will be an unforgettable night of action in Paris on Oct 10.”

Holding an impressive MMA record of 30-10-2, 1 NC, France’s Cheick Kongo returns to action following a title fight against heavyweight champion Ryan Bader last September. The former kickboxer remains unbeaten since 2015 and will enter the Bellator cage on home soil for a rematch against a familiar opponent in heavyweight contender, Tim Johnson. With the most fights (15) and wins (12) in Bellator heavyweight history, as well as victories over Vitaly Minakov, Mirko Cro Cop, Antoni Hardonk and Matt Mitrione, the Parisian is planning for a successful homecoming on Oct. 10.

On the heels of a dominant TKO victory over veteran Matt Mitrione at Bellator 243 in August, Tim Johnson is set to compete for the third time in 2020 seeking revenge in a rematch from 2018 against Cheick Kongo. Now training out of Las Vegas, Johnson has quickly earned his place near the top of the Bellator heavyweight division with his recent wins, including a viral knockout over top prospect Tyrell Fortune in February. Boasting a career record of 14-6, with 11 coming by way of finish, the Minnesota-born military veteran looks to carry his momentum into a fight that has future world title implications.

Currently riding a three-fight win streak, Michael “Venom” Page, better known to fans as “MVP,” returns with the intention of spoiling the debut of European welterweight prospect, Ross Houston. Holding a career record of 17-1, with 14 wins coming by way of stoppage, the pride of London Shootfighters looks to remind people why he is one of the most exciting strikers in all of MMA. In addition to his MMA accolades, Page is a 10-time kickboxing world champion and also undefeated as a professional boxer.

After signing with Bellator in February, Scotland’s Ross Houston will make his promotional debut against one of Bellator’s biggest stars in Michael Page. “The Hitman” plans on keeping his 8-0, 1 NC undefeated record intact and moving one step closer to Bellator gold in the toughest test of his career to date. With three submission victories to his name, Houston’s Brazilian jiu-jitsu skills make him a viable threat if the fight goes to the ground against one of Bellator’s most feared strikers.

About Bellator:
Bellator is a leading global MMA and kickboxing promotion featuring many of the best athletes in the world. Under the direction of veteran fight promoter Scott Coker, Bellator events take place in major cities around the world and can be seen on television in over 160 countries to an available audience of over one billion people. In the United States, Bellator events can be seen on both Paramount Network (formerly Spike TV) and DAZN, the world’s first truly dedicated LIVE sports streaming service, while Bellator MMA Recharged airs on the CBS Sports Network. Bellator is comprised of an executive team that includes top industry professionals in television production, live events, fighter development/relations, sponsorship, international licensing, marketing, advertising and public relations. Bellator is based in Hollywood, Calif. and owned by entertainment giant ViacomCBS, home to the world’s premier entertainment brands that connect with audiences through compelling content across television, motion picture, online and mobile platforms.