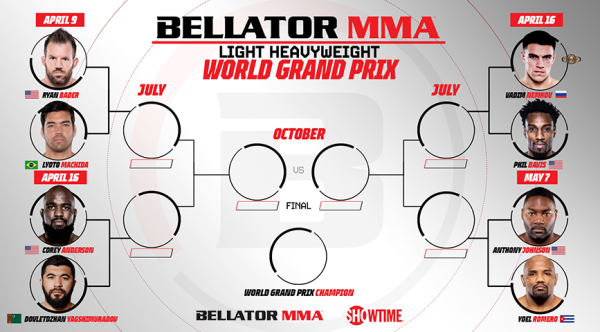 Bellator MMA 256: Bader vs. Machida 2 on Friday, April 9 live on SHOWTIME will feature the first of four quarterfinal matchups, as BELLATOR Heavyweight Champion Ryan “Darth” Bader (27-6, 1 NC) steps inside the cage across from former UFC champion Lyoto “The Dragon” Machida (26-10). A rematch nearly nine years in the making, Bader starts the tournament in hopes of reclaiming his second title and once again reigning over multiple divisions, while Machida plans on history repeating itself and advancing to the semifinals.

As a result of these changes, BELLATOR MMA 258: Archuleta vs. Pettis on Friday, May 7, will now feature the BELLATOR debuts of both Anthony “Rumble” Johnson (22-6) and Yoel “Soldier of God” Romero (13-5), when they square off in the last quarterfinal matchup. The five-round fight will serve as the card’s co-main event. The event is headlined by a BELLATOR Bantamweight World Championship contest pitting Juan “The Spaniard” Archuleta (25-2) against Sergio “S.P.” Pettis (20-5).

“I’m thrilled to begin the BELLATOR MMA Light Heavyweight World Grand Prix featuring the best 205-pound fighters in the world,” said BELLATOR MMA President Scott Coker. “Like everyone, we had a few hurdles with travel issues and had to move some things around, but I’m pleased that we were able to reschedule these bouts quickly. We now have three stacked events in a row featuring quarterfinal matchups on SHOWTIME, while also adding other incredible fights to each of these cards.”

Below, please find the most up-to-date card listings for all three aforementioned events. (Please note these fight cards are current, but not yet complete.)

About Bellator
Bellator is a leading global mixed martial arts and kickboxing organization featuring many of the best fighters in the world. Under the direction of veteran fight promoter Scott Coker, Bellator events take place in major cities worldwide and can be seen on television in over 160 countries to an available audience of over one billion people. In the United States, Bellator can be seen on SHOWTIME. Bellator is comprised of an executive team that includes top industry professionals in television production, live event orchestration, fighter development/relations, venue procurement, sponsorship creation/development, international licensing, marketing, advertising, publicity and commission relations. Bellator is based in Hollywood, Calif. and owned by entertainment giant ViacomCBS, home to the world’s premier entertainment brands that connect with audiences through compelling content across television, motion picture, online and mobile platforms.